The Bow is both stunning as a form and functions well from an environmental and urban standpoint, especially in the context of a harsh northern climate.

This 60-story mixed-use building, located on the north bank of the Chicago River, features a sunlit waterfront public garden with access to the river's edge. 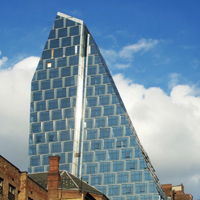 The first six stories of 35XV Residences feature a granite base containing a high school, while the upper residential portion is aluminum-clad with offset glass.

This 52-story building was constructed adjacent to and over active rail lines to enhance the character of this prominent river frontage while concealing the existing rail lines below.

The American Copper Buildings present two bold and dynamic residential towers in New York City that are clad in copper, a living material that will patina gracefully over time.

Winner of the 2019 Best Tall Residential or Hotel Building Award, this project utilizes high ceilings and large windows to allow light and views to penetrate every unit.

277 Fifth Avenue's transparency, glass, and expansive views are the defining characteristics of the building, which is cantilevered over an existing five-story brownstone.

Cerami & Associates is comprised of acoustical, audiovisual, and technology design consultants working together as one team.

They focus their collective expertise, experience and commitment to help clients make the best decisions for their projects. Their experience provides them with the background expertise needed to provide comprehensive acoustical and technology consulting services on projects of any size or project type.

From corporate facilities to hospitals, museums to laboratories, courthouses to hotels, and transportation hubs to retail spaces: they have successfully completed projects of all types. Cerami & Associates' clients number among world-class developers, top architects and engineers, and Fortune 100 companies. Through their work with these clients, Cerami & Associates have earned a reputation for design excellence.