KLCCP’s strength is reflected through its premium assets centered within the KLCC Development, one of the largest integrated real estate developments in the world.

CTBUH Malaysia: How to Improve Design and Build Efficiency

Apr 2011, CTBUH Journal Paper – Tall buildings are spreading across the globe at an ever-increasing rate… The Design, Construction and Operational Maintenance of The Petronas Twin Towers Skybridge 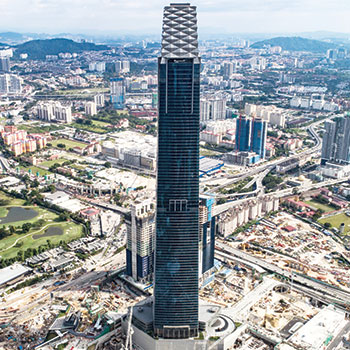 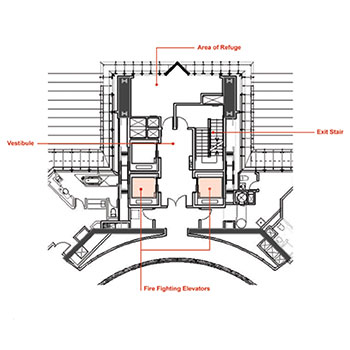 The Design, Construction and Operational Maintenance of The Petronas Twin Towers Skybridge
21 Oct 2018 – Hashimah Hashim, KLCC Property Holdings Berhad
The skybridge linking the two supertall towers of Petronas was designed not just for its strong distinctive aesthetic feature, but also serves as a primary function for office occupants’ circulation. It also doubles as occupants’ emergency exit in…

Rethinking CTBUH's Height Criteria in the Context of Tall Timber
30 Oct 2017 – Presentation at CTBUH 2017 Australia Conference; Robert Foster, The University of Queensland
Recent developments in the design and construction of progressively taller buildings using engineered timber as a structural material raise important questions about the language that is used to describe tall buildings. This presentation discussed…

The Ledge, Tilt, SkySlide and Other Attractions: Rejuvenating Observation Decks
19 Oct 2016 – Jason Gabel, CTBUH
Over the past few years, numerous existing observation decks have been completely reinvented, partly in an effort to compete with newcomers on the market, but also to capitalize on the public’s desire to see cities in new and exciting ways. Thus, in…

Tower Tops: More Than Meets the Sky
19 Oct 2016 – Gavin Erasmus, Farrells
Humans always had the ambition to go high, taking whatever means to reach the sky. What do tower tops represent and in what form do they meet the sky? Historically they are seen as icons of power, status of the owner or corporation, or as religious…

Terminal Tales: Reflections on CTBUH Height Criteria and the Tops of Towers
19 Oct 2016 – Steven Henry, CTBUH
Perhaps the most difficult aspect of measuring the official height of a tall building is determining its highest point. As the arbiter on tall building height and the keepers of the world’s most comprehensive skyscraper database, The Skyscraper…

Panel Discussion: How High Can We Go and Why Should We?
18 Oct 2016 – Ron Klemencic, Magnusson Klemencic Associates; Karl Almsteadm, Turner Construction Company; Andrew Nicholson, CBRE; Jon Pickard, Pickard Chilton; Ian Smith, thyssenkrupp
Given the right amount of space and acceptable economic incentives, many believe that the limit to how high a building can go is potentially much higher than the thresholds being achieved today. This panel discussion convened colleagues from…

Petronas Towers and KLCC: Urban Catalyst
26 Oct 2015 – Presentation at CTBUH 2015 New York Conference; Faudziah Ibrahim, KLCC Property Holdings Berhad
This presentation examines the role of skyscrapers in a well-planned mixed commercial development that is not driven by speculative short-term investment goals in revamping the physical landscape of a city, transforming the skyline, and catalyzing…

Fazlur Khan Lifetime Achievement Medal: Geotechnics for the World’s Tallest
7 Nov 2013 – CTBUH "12th Annual Awards"; Clyde N. Baker, Jr., AECOM
Clyde Baker has performed geotechnical engineering for seven of the 16 tallest buildings in the world, and a major portion of the high-rise buildings built in downtown Chicago. Mr. Baker has developed an international reputation in the design and…

Fazlur Kahn Lifetime Achievement Medal: A Lifetime’s Engineering Collaboration
18 Oct 2012 – CTBUH 2016 China Conference; Charles Thornton & Richard Tomasetti, Thornton Tomasetti
The partnership between Charles Thornton and Richard Tomasetti has provided the backbone for many of the most dramatic and innovative tall buildings around the world. Their legacy includes Taiwan’s Taipei 101, the Petronas Towers in Malaysia and the…

Founder and First Chairman 'Lynn Beedle'
2 Nov 2008 – CTBUH Leader Presentations & Meetings; CTBUH 2008 Leader Presentation Video
Biography about Lynn Beedle and the Council on Tall Buildings, narrated by his son David and shown during the first annual awards dinner. For his 30 years of dedicated service to the Council and contributions to the profession Dr. Beedle was…

The Tallest 20 in 2020: Then and Now
Mar 2020 – CTBUH Journal 2020 Issue II; CTBUH Research
This research paper undertakes a review of the 2012 report by the Council on Tall Buildings and Urban Habitat, “Tallest 20 in 2020: Entering the Era of the Megatall,” assessing the accuracy of the predictions made at that time against the reality of…

The Tallest 20 in 2020: Predictions vs. Reality
Mar 2020 – CTBUH Journal 2020 Issue II; CTBUH Research
In the first edition of the 2012 Journal, CTBUH published a Tall Buildings in Numbers study titled Tallest 20 in 2020: Era of the Megatall—The Projected World’s Tallest 20 Skyscrapers in the Year 2020. Now that we have arrived at the second edition…

Fifty Years of Fire Safety In Supertall Buildings
Oct 2019 – 2019 Chicago 10th World Congress Proceedings - 50 Forward | 50 Back; Peter Weismantle, AS+GG; James Antell, Telgian Engineering & Consulting
As international design teams participated in the development of high-rise structures around the world, many of the concepts of fire-safe design first introduced in the United States have been adopted, amended and otherwise modified to become…

Conjoined Tower Structures for Mile-High Tall Buildings
Mar 2019 – International Journal of High-Rise Buildings Volume 8 Number 1; Kyoung Sun Moon, Yale University
Tall buildings are one of the most viable solutions to deal with the global phenomenon of rapid population increase and urbanization. While tall buildings are an essential building type to accommodate ever-growing urban population, as buildings…

World’s Tallest Buildings with Dampers
Jul 2018 – CTBUH Journal, 2018 Issue III; CTBUH Research
As tall buildings continue to be built in seismically-active and cyclone-prone areas, the need to augment the structures of these buildings with dynamic modification devices (in this case, dampers) to counteract these forces is growing. This data…

Petronas Towers and KLCC: Urban Catalyst
26 Oct 2015 – Asia & Australasia: A Selection of Written Works on the World's Tall Building Forefront; Faudziah Ibrahim & Phui Kuan Leong, KLCC Property Holdings Berhad
Skyscrapers have a powerful role in revamping the physical landscape of a city, transforming the skyline, and catalyzing urban growth. This is especially true in the case of a well-planned mixed commercial development not driven by speculative short-…

Rethinking Evacuation: Rethinking Cities
Aug 2011 – CTBUH Journal, 2011 Issue III; Antony Wood, CTBUH
The terrorist attacks and consequential collapse of the World Trade Center towers on September 11, 2001 resulted in, arguably, the largest single retrospective analysis of the design of tall buildings since the birth of the typology in the latter…

Tall and Urban: An Analysis of Global Population and Tall Buildings
Apr 2011 – CTBUH Journal, 2011 Issue II; CTBUH Research
Tall buildings are spreading across the globe at an ever-increasing rate. This study demonstrates the relationship between population and tall buildings across those countries and presents information on the average height and age of each country’s…

The Tallest Buildings in the World: Past, Present & Future
Jun 2008 – CTBUH Journal, 2008 Issue II; CTBUH Research
Over time, the average height of the 100 tallest buildings in the world has been steadily increasing. However, by 2010, this average height will have jumped to 349 meters, up from 286 meters in 2000, an increase of 22%. This is almost double the…

Alternative Forms of Tall Building Evacuation
May 2007 – AEI / NIST Conference May 2007; Antony Wood, CTBUH Executive Director
The terrorist attacks on, and consequential collapse of, the World Trade Centre towers on September 11th 2001 has resulted in, arguably, the largest single retrospective analysis of the design of tall buildings since the birth of the typology in the…

Application of High Performance Concrete in Petronas Twin Tower, KLCC
Oct 2004 – CTBUH 2004 Seoul Conference; Jae-Ho Kim & Seung-Hoon Lee, Samsung Corporation
This paper will focus on the development of high performance concrete for the highest building in the world, which required careful planning and choice of materials, laboratory and mock-up testing to confirm the mix design, and strict control on the…

Life Safety System Design for the Petronas Twin Towers
Oct 2003 – CTBUH / CIB Kuala Lumpur 2003 Conference; Lawrence S. Ng, Cesar Pelli & Associates
One of the early design meetings of the Petronas Twin Towers was held in New York on the date of the first explosion at the World Trade Center in February 1993, when a truck packed with explosives detonated in the basement of the North Tower. The…